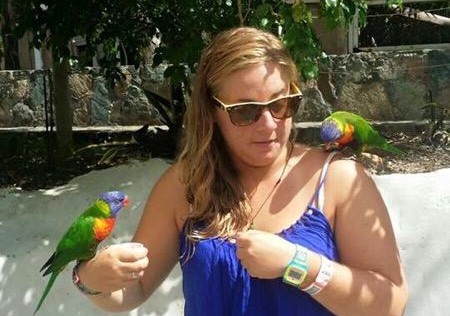 Liz – Game Master by day, a connoisseur of fine antique wallpaper by night. I have no evidence to back up that last claim, but I also have nothing to say it’s not legitimate. Truthfully, the only reliable reality here is that Liz may or may not have an extensive knowledge of ancient wallpaper. And no, I’m not getting away from the point of this bio. Trust me, it comes full-circle, and when it does, won’t you feel silly about your judgy attitude! But this blog isn’t about me, the dashing young New Englander, whose fingertips elicit such beautiful blogs that their wording borders on the poetic. No, this blog is and always shall be for the one and only astounding Game Master and Master of the Sea, Liz. While her living quarters for most of her life have been in Revere, truly her heart belongs to the sea (well that and her nephew – who I must admit is factually ridiculously adorable but don’t tell her I told you that).

From a very early age, Liz spent an extensive amount of her time around boats, water, and all sorts of aquatic life. She’s basically ‘The Incredible Mr. Limpet’. Look it up. If you’re in the business of reading about topical and relevant references then you’ve come to the wrong place. Read literally any other blog for that. But back to Liz. While she was born a Mass native, her credentials as the world’s coolest marine biologist have taken her far beyond the boundaries of the commonwealth. Her wayfaring has taken her to the Caribbean, where she’s taught sailing and the magic that the oceanic ecosystem has to offer to young aspiring explorers, to Alaska where she served as a data collector for the National Marine Fishery Service, to a plethora of other destinations. Quite recently she’s even received her license as a bona fide Captain – so if you see her around show some respect!

Recently over the course of extensive research on Liz for the porpoise* of this bio, I have stumbled upon a few remote destinations that Liz has visited. It seems that she’s made quite the impression during her travels because I was able to gather a collection of poems, songs, and other pieces of art created by the people she’s visited. Below are a few choice examples:

One that all adored and which I can attest

In her arms there was safety always wrapped in

But those days are now bygone at best

Any sightings of the dear sea Captain were utterly hard pressed

What followed were years of peace and prosperity

But what silence there was was short lived and stressed

Across the ocean there brewed a storm that screamed of severity

The sea rose up as if in a mighty rage

Greeting each door with thunderous vulgarity

The rising tides – her instruments, the island – her stage

But all is darkest just before the dawn

For on the horizon there shown a faint glow

The shape of what was long to be thought lost, strikingly burst upon

Toe to toe she went with each shaking blow

For although differently looking from the Captain of old she is

Her heroics made it clear that the two Captains were one.

There stood victorious on the coastline, our brave Captain Liz

And that’s a wrap! (told you it would come back around). This has been a brief history of our very own Liz. If you’d like a seasoned explorer to lead you through your next intrepid adventure through one of Boston’s most difficult and immersive escape rooms, then book a game right here and make sure to request Liz!