Here is a sampling of Trapology’s favorite Games to Play During Quarantine to hold yourself over until you can come back to Trapology to play our escape games!

It’s a good balance between strategy and luck. It’s a relatively simple game to learn, and when you’re ready to take it further, there are extensions. Our favorite extension is Cities and Knights. “Catan Universe” is also available web-based for PC and Mac as well as on Steam! 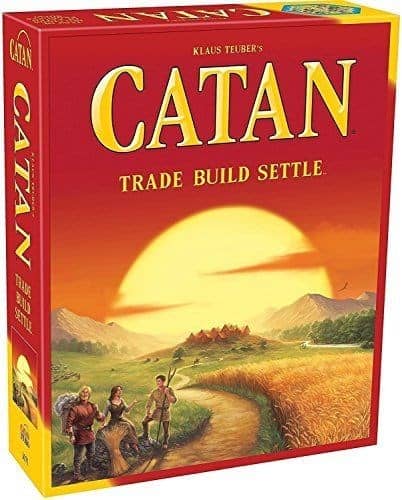 This might be hitting it too close to home given current events, but it’s a great cooperative board game where a virus hits the world, and you must work together in a team of four to eradicate the disease before the the epidemic spreads too quickly! A digital version is available on xbox, switch, ipad, android, and steam! 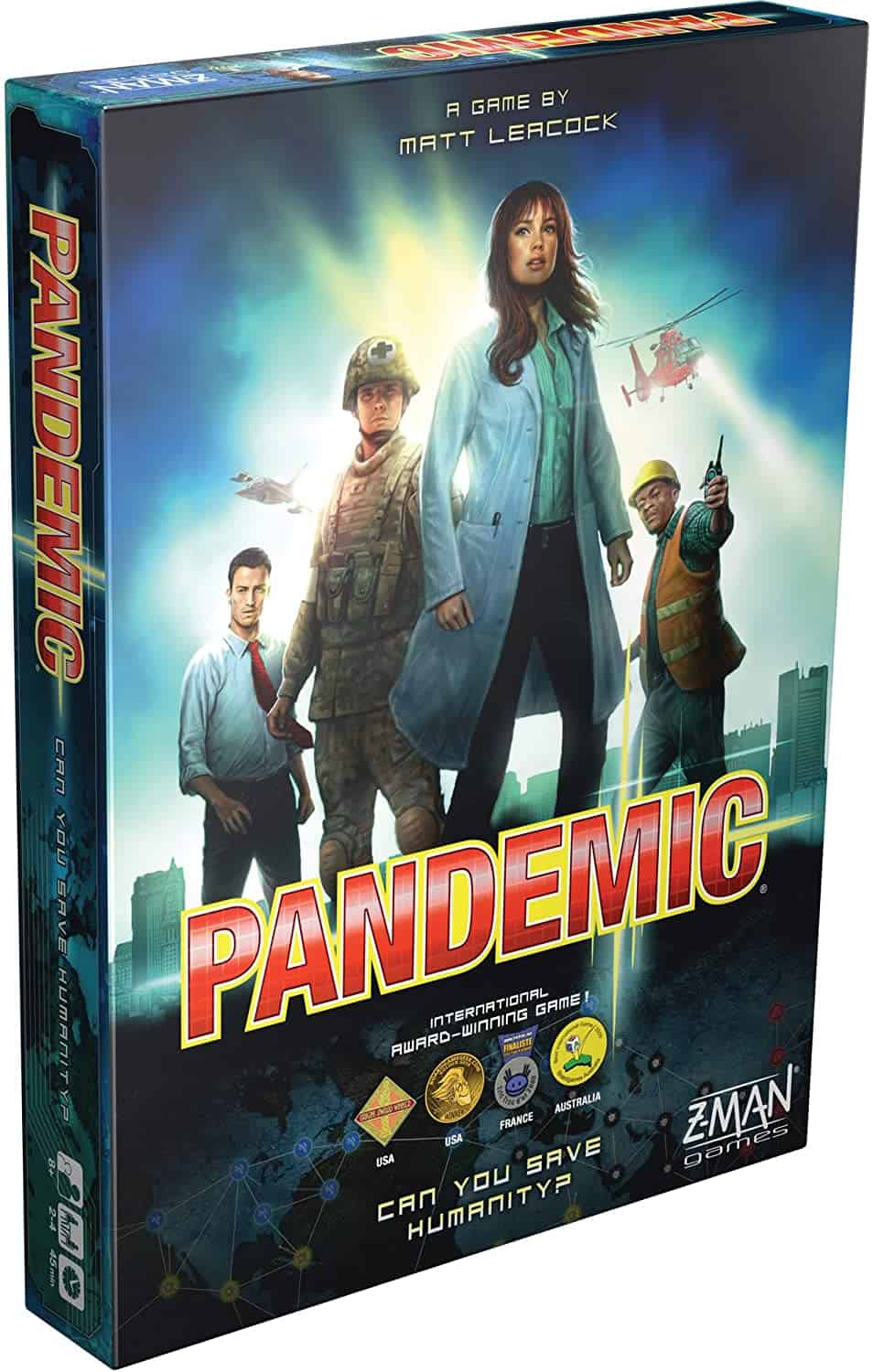 The Resistance, One Night Ultimate Werewolf, Dead of Winter, Secret Hitler, and Mafia

All are similar social deduction games where some characters have secret agenda and motives. It’s up to you to figure out who is lying and who is genuinely trying to ally with you! You can play many of these games online: Resistance, Secret Hitler and Mafia

Guesstures is a fancier version of charades where there are two teams, and one player acts out four different cards, one after another, each with different point values. The device that comes with the game is set to a timer, where specific cards will disappear if your team doesn’t guess it in the time allotted!

The asymmetric game play coupled with a wide selection of factions to choose, with more coming out soon, means that each game you play will always be different. Additionally, they’ve incorporated an AI for one of the factions to allow for solo play or cooperative play. Once you wrap your head around the rules for each faction, the overall gameplay is actually very simple, but that doesn’t take away from the challenge. -Christopher Compton

As an RPG nut, this game is like a thin version of D&D. It’s less about the character development and more about dungeon crawling. I find this to be one of the best balanced games I’ve played. Nearly every scenario I play with my group always comes down to a very thin line separating success from failure. And having the option to play new classes and unlocking new items always keeps us coming back for more. This game is pricey with a $100+ price tag, but with each scenario running about 1 to 2 hours, you get your money’s worth. -Christopher Compton

Betrayal at House on the Hill

The board is constructed of tiles that are revealed as you and your friends explore the house, so the layout is always different. Coupled with 100 haunts (if you have base game and expansion), you’re almost guaranteed to never play the same game twice. The game isn’t perfect, as some of the haunts play better with more or fewer players than others, but it certainly gives you your money’s worth here as well. -Christopher Compton

Random evolutionary traits and strategy make this a cut throat game for some and an experiment in turtling up defenses for others. How you play can be determined entirely by the cards you draw, and the cards your opponents play. If you’re not careful, you may be forced to feed on yourself. -Christopher Compton

Varying levels of fun depending on who you’re playing with but with a goofy group of actors, There’s a story, a soundtrack, roleplay, strategy… all the things. It can take forever so this is the one game that I let go past my 1 hour mark. -Kellian Pletcher

Race for the Galaxy

This is like the only “serious strategy” game I like.I love that I don’t have to wait for other people to finish their turns.  -Kellian Pletcher

I love how they use AR, audio and story .There’s so much extra game to build with this format. It’s a whole new game structure. -Kellian Pletcher

A worker placement resource management game similar to Catan, but on hard mode. You are building your farm, but you need to have room for all the resources and cannot afford to completely certain part of the game to win. Each game is different as to what cards are dealt, which offers different strategies for different play styles. -Jeff Wong

Fast paced quick game that will get the whole group laughing while camels climb on each other’s humps. Kinda like race betting, bets are made for each round. Winner is the one with the most money at the end. You’ll get frustrated when the camel you’re cheering for gets humped by another camel and crosses the finish line. -Jeff Wong

A fun drafting based game with multiple strategies based on which board you are using. Games are short enough to play multiple times, lasting around 30 minutes each. -Jeff Wong

Good intro to Euro-style game mechanics. Also very easy to learn and another game that only takes about 30 minutes per game. -Jeff Wong

Your medieval-setting band of survivors equip weapons, armor, magic and upgraded abilities to kill zombies, which then increases the difficulty and the number of zombies too! This multi hour long D&D-lite style game really gets going when you have hundreds (exaggeration) of miniature zombies chasing you around the board! -Kevin Thai

Chess is too long and rules too static. Onitama on a 5×5 board with 5 pieces each and both players share the same 5 moves which is randomly chosen at the start of game. I love it because it’s quick to learn and the moves are always different. It’s also free on iOS! -Kevin Thai

In most games, each player has the exact same rules and objectives. In Vast, the dragon’s goal is to escape; the knight seeks to slay the dragon; and the cave wants to kill everyone. Each of the 5 roles have their own abilities, upgrade tree, and objectives that scales perfectly to
2-5 players. It’s so much fun! -Kevin Thai

I love love love love Magic: the Gathering but it’s a huge financial investment and expansions are completely random. Star Realms uses similar mechanics, is for 2-6 players and playable straight out of the box. It’s also free on iOS! -Kevin Thai

You’re a Kaiju! My elementary school aged niblings picked this up in minutes, and even beat me a few times. The strategy is don’t die, kill everyone else. -Kevin Thai

This will destroy friendships and families. The post apocalyptic cooperative zombie game is designed to sow distrust right at the start. Everyone needs to first achieve the group goal, and then to win, they’ll need to complete their own secret objectives which may mean sabotaging each other. And then there’s (maybe, probably, most likely) the real (but not always) secret betrayer who wins when zombies win. -Kevin Thai

Card games to play during Quarantine

A faster-paced, less lose-all-your-friends version of the popular board game. Collect properties, steal them from friends, and work to get three sets! Play online here

It’s a card game where russian roulette meets exploding felines! It’s also  the most-funded game in Kickstarter history! We highly recommend the NSFW version. Download the app to play with your friends!

It’s a fast, easy-to-understand, and simple pick and pass card game. Gain as many points as you can. It’s got the most adorable illustrations, and is safe for families! We love the Sushi go party pack version because the game adds a conveyer belt, which tracks the number of points you have.

I have fond memories of my roommates yelling at each other for this game. It’s a card game where you’re given a word, and your objective is to get your teammates to say the word based on your description, except there is a whole list of words you are not allowed to say. Play Taboo online here! – An awesome one to add to the games to Play During Quarantine list 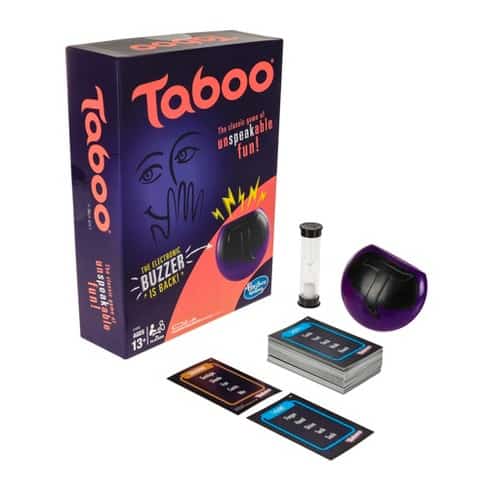 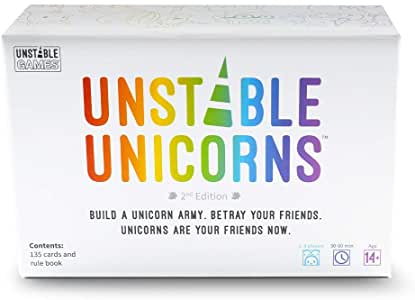 Get to know each other’s way of thinking with a set of fun questions. Here’s a printable version that  a blogger on freshlycompleted.com created.  There’s an adult version that is absolutely not a game you’d want to play with children, but a hilarious one to get to know some of your friends’ deep dark secrets. Although, at the end of it, you may wish you didn’t know.

This card game is coined the “party game for horrible people”. Each round, one person picks up a black card, which is typically a partial sentence with a blank. All other players have a set of cards in their hands, and puts down the funniest card that they feel has a word or phrase that fits in the blank. The player who orignally put down the black card gathers the white cards and selects the funniest one. Play Cards Against Humanity here.  A safe for family and safe for work version is called Apples to Apples!

Although the base mechanics of the game are simple, it takes dedication, planning, and a good imagination to master. With each player creating decks from their own collection of cards, there is virtually no limit to the variation in decks you can play with. My only reservation about this game is that it is a trading card game, meaning your limited by what you’re willing to spend on cards. Luckily, there are online versions of the game that grant access to every card for online play. -Christopher Compton

Deck building game that is fairly easy to play. Lots of card set combinations so no two games are ever the same. A few expansions adds cool mechanics to some cards to give a better risk/reward strategy. Multiple win conditions so you’ll need to build the most efficient deck while gather the most Victory point cards. -Jeff Wong

Great party game that gets everyone arguing what the clue really means. Can be played with any number of people and people can come and go during the game. Infinite combination with the cards and the assassin layout changes it ever so slightly. The pace of the game can drag depending on the spymaster, otherwise figuring out their clue can be rewarding when they give a clue for 3-4 words. -Jeff Wong

Hands down, my favorite escape game puzzles ever, and an awesome addition to the Games to Play During Quarantine list. Escape game enthusiasts will love these. They are well designed, well developed, and satisfy me for hours. Veritas is their newest adventure. Some of their others are: All That Remains, The Forgotten Room, A Short Tale, Cabin Escape: Alice’s Story and Forever Lost 1, 2, 3. Buy them here

A beautiful puzzle box with incredible mysteries. You have to play it to believe it.  Available on the iOS app store

It’s a text-based adventure mobile game where you guide Taylor through a spaceship crash landing. Available on Steam, iOS, and android.

This game is called an “illusory adventure”, a sophisticated puzzles of optical illusions and mazes! Available on the app store and google play.

A Magical ARG Puzzle Hunt by the ASPMC

An online ARG puzzle hunt created by artists and freelancers whose work has been affected by Covid19. Support them on Kickstarter here!

Though it’s very fun to play with physical cards, meeples, and all of the little knick knacks that come with board games, we encourage everyone to wash their hands, sanitize everything they touch, and practice safety! We’re thankful that there are lots of good online versions so that we can still play our favorite and best games for social distancing.

What games are you playing right now? Do you have any suggestions for Games to Play During Quarantine? We’re drawn to good ol’ strategy games, or ones that make us laugh. Give us your top choices!